For the Hellenistic city in the Pontus, see Eupatoria (Pontus).

The first recorded settlement in the area, called Kerkinitis (Κερκινίτης), was built by Greek colonists around 500 BC. Along with the rest of Crimea, Kerkinitis was part of the dominions of Mithridates VI, King of Pontus, from whose nickname, Eupator, the city's modern name derives. 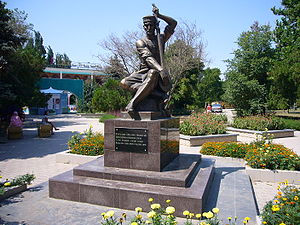 From roughly the 7th through the 10th centuries AD Yevpatoria was a Khazar settlement; its name in Khazar language was probably Güzliev (literally "beautiful house")[источник?]. It was later subject to the Cumans (Kipchaks), the Mongols and the Crimean Khanate. During this period the city was called Kezlev by Crimean Tatars and Gözleve by Ottomans. The Russian medieval name Kozlov is a Russification of the Crimean Tatar name.

For a short period between 1478 and 1485, the city was administrated by the Ottoman Empire. Afterwards it became an important urban center of the Crimean Khanate. In 1783, with the whole Crimea, Kezlev was captured by the Russian Empire. Its name was officially changed to Yevpatoria in 1784. The city was briefly occupied in 1854 by British, French and Turkish troops during the Crimean War, when it was the site of the Battle of Eupatoria. Adam Mickiewicz visited the town in 1825 and wrote one of his Crimean Sonnets here; it was later translated into Russian by Mikhail Lermontov.

The 400 year old Cuma Cami mosque is one of the many designed or built by the Ottoman architect Sinan.

Yevpatoria has spas of mineral water, salt and mud lakes. These resorts belong to a vast area with curative facilities where the main health-improving factors are the sunshine and sea, air and sand, brine and mud of the salt lakes, as well as the mineral water of the hot springs. The population of the town is sure to have known about the curative qualities of the local mud that can be found here from time immemorial, which is witnessed by the manuscripts of Pliny the Elder, a Roman scholar (ca 80 BC).